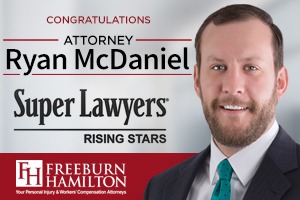 He currently represents clients at trial, during arbitration, and in mediation. As a member of the Dauphin County Bar Association, Ryan is admitted to practice before both the Pennsylvania Supreme Court as well as the United States District Court for the Middle District of Pennsylvania.

The Super Lawyers Rising Stars list recognizes the achievements of attorneys who are either 40 years of age or younger or have been in practice for ten years or less. Eligibility to be named a Rising Star is based on nominations, independent research, and peer evaluation.

For years; the experienced, compassionate team of attorneys at Freeburn Hamilton has helped thousands of Pennsylvanians. We stand by our clients when they require assistance with:

When you call, you’ll speak with a leading Harrisburg personal injury lawyer for FREE. Freeburn Hamilton will fight hard to seek the justice and the compensation you deserve after an injury. Just call the 7’s for help at 717-777-7777 or 570-777-7777. There is no attorney’s fee due up front—and we only get paid after you do.