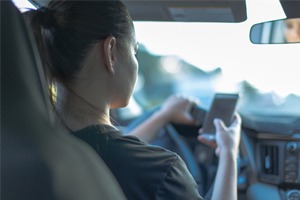 A new study from researchers at Penn State Hazleton and the National Institute for Occupational Safety and Health has found that video-based “threat appeals” diminished the impulsive decision-making skills that are associated with those who text and drive. The study serves as a promising discovery as a possible means for striving to reduce – or ideally eliminate – texting and driving.

Distracted driving has become something of an epidemic. With rapidly changing technology that has left many of us glued to our phones or staring at our GPS, every year thousands of people are killed in crashes (and hundreds of thousands are injured in crashes) caused by distracted drivers. Despite individuals understanding of the dangers associated with texting and driving, it does not stop them from doing so.

The main purpose of Penn State and NIOSH’s recent study was to help to uncover effective ways to help reduce texting while driving. The paper appeared on March 7 in PLOS ONE, a journal that publishes multidisciplinary research in more than 200 subject areas across science, engineering, medicine, and the related social sciences and humanities.

What is a Threat Appeal?

According to Yusuke Hayashi, associate professor of psychology at Penn State Hazleton and lead author of the research paper, a “threat appeal” is a message that tries to raise the threat of danger and harm and discourage risky behavior. “It doesn’t have to be scary. It doesn’t have to show a crash.”

However, Hayashi says that in order for a threat appeal to be effective, it still must appeal to our human emotions and stimulate our thoughts about the consequences of our risky texting while driving behavior. Despite previous anti-driving-while-texting PSAs focusing on fear of harm to oneself, according to Hayashi, the new study shows that threat appeals demonstrating the “anticipated regret” of killing or injuring another person are also effective.

The study examined a total of 100 Penn State Hazleton students, who were then split into an experimental group and control group of 49 and 51 members respectively. The experimental group watched a 60-second video-based threat appeal, which depicted a young woman answering a text while driving before swerving into another lane into an oncoming vehicle driven by a mother who was accompanied by her two young children. In the threat appeal, time freezes and the two drivers are shown exiting their vehicles and having a conversation, making it clear that the crash is inevitable. Time then starts again and the collision occurs. After the crash, a message on the screen not to text and drive appears.

The control group watched a separate 60-second car commercial, featuring actor Matthew McConaughey in a vehicle stopped in the middle of the road because it is blocked by a large bull. The video contains no depiction of texting while driving and no explicit danger or consequences. Essentially, it served as a placebo video for the control group.

After both groups watched their respective videos, they took a computer-based survey, which assessed how willing they were to delay texting and driving by 30 seconds, five minutes, 15 minutes, 30 minutes, an hour, and two hours. In other words, it examined how impulsive their decision-making to text and drive was.

Individuals in the control group were approximately 50 percent more likely to make the impulsive decision to text and drive than the participants in the experimental group, who watched the threat appeal.

According to Hayashi, the theoretical foundation of the study was behavioral economics, an interdisciplinary area that applies the principles of economics and psychology to study how people make decisions. The economic concept relevant to the study is “discounted present value”: the value of texting two hours from now is perceived to be smaller (i.e., discounted) than the value of texting right now. In other words, people perceive $100 a month from now to have less value than $100 right now.

If you or a loved one has been injured in a motor vehicle accident caused by a distracted driver, it can have quite an impact on multiple aspects of your life. You should not have to pay for the mistakes of another person. The car accident lawyers at Freeburn Law can help you to receive the compensation that you deserve. To learn more or to schedule a free consultation, contact us today at 717-777-7777!